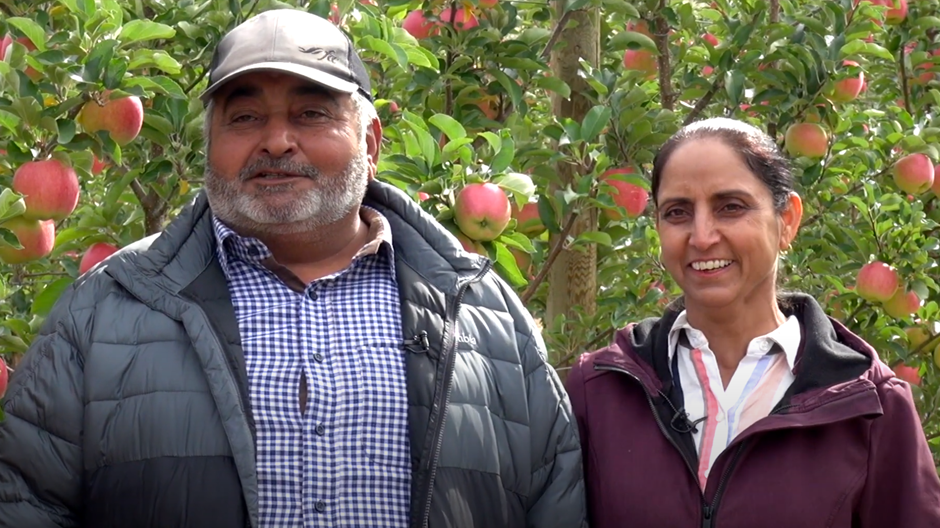 
Farmers, in general, are no strangers to risk but Railou Gill appears to be quite friendly with the idea of taking chances.

He and his father moved to Canada when he was a teenager. He’d spent a little time on his uncle’s farm during his high school years but had no idea how to run one. That didn’t stop him from taking charge when his father bought an orchard. And, they were successful.

Flash forward to a trip to India where he met and married his wife, Rupinder, in less than a day. That worked out as well as the happy couple shared with us the success of their partnership – not the least of which is their four children.

Rupinder wasn’t too sure about Railou’s next gamble – buying a very large piece of barren land that didn’t have a water supply.

When we visited them at Paradise Orchards in Cawston, BC (while they were proudly harvesting their Ambrosia apples), we discovered what happened when they took that chance. And, how Railou managed to convince Rupinder it would all work out.

After visiting with them, we’re going to guess that every challenge and chance-taken came with a lot of laughter. We’re sure their story will put a smile on your face – we’d love for you to meet them.

The AMBROSIA & cross section design trademarks are used under license from Wilfrid and Sally Mennell. This profile is owned and shared with permission by NTFVDC (New Tree Fruit Varieties Development Council).