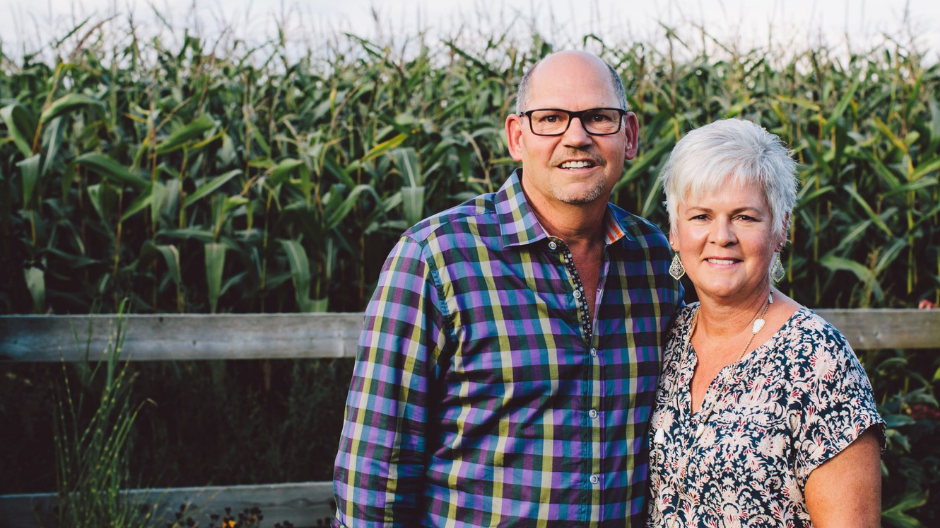 Meet Rob and Charlotte Lepp and their family. The Lepp family have deep ties to the farming lifestyle and used to grow grain in Saskatchewan prior to moving to BC. Rob’s father arrived in Abbotsford in 1948 and purchased the Matsqui property–where Lepp Farms now stands. Following high school, Rob started farming with his father and they expanded Lepp Farms into a large hog farm.

Charlotte’s family also has roots in farming. She grew up raising poultry and raspberries. Together, Rob and Charlotte have developed Lepp Farms into a diverse family-owned business and are proud to see their sons Mike and Jason involved in the farm, as well as their son-in law Jeff (married to their daughter Carrie). Lepp Farms is the fulfillment of Rob and Charlotte’s passion for farming, and a long-held dream of being able to continue the tradition of a family-run farm.

While their roots are in hog farming, Lepp Farms has continued to expand, and now they also raise chickens at their Matsqui location. They even have a herd of beef cattle which are raised on range land near Cache Creek in the B.C. interior. All the Lepp’s animals are raised with care in environments that help them thrive. Their local B.C. meats are prepared by skilled butchers and sold in their store, Lepp Farm Market.

In addition to their livestock, the Lepp family has two orchards in the Okanagan where they grow cherries, apricots, peaches, nectarines, plums and apples. Vegetables such as sweet corn, beans, cucumbers, and pumpkins are other popular products grown on the farm and sold at their market. They have recently started to use new growing innovations to produce strawberries in outdoor ‘tunnels’ and lettuce in a hydroponic greenhouse. This allows them to supply fresh, healthy fruits and vegetables to the community year-round.

Lepp Farm Market is committed to providing the community with high quality locally-grown, meats, produce, and gourmet products– all in one family-run shop.